Pay for entry at Checkers 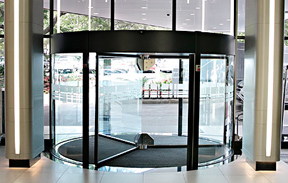 There are a number of reasons why an automatic revolving door would be installed as opposed to other automation products, such as automatic sliding doors. Firstly, a revolving door offers a prestige solution for the building entrance and may be the preferred solution of the architect who is designing an upmarket building. Secondly, the door influences pedestrian traffic patterns. Lastly, revolving doors create a draft-block (air lock) between the internal and external environments of a building. The minimising of airflow into and out of the building plays a significant part in lowering air conditioning costs.

The benefits of using an automatic door outweigh the potential dangers. All Turnstar automatic revolving doors are fitted with optical safety edges in a rubber profile which prevent crushing between the door wings and the door frame. However, there have been certain incidents around the world where the safety edge has performed correctly, but an injury has occurred due incorrect use of the door whilst a number of people are walking through the door.

In one case, a store patron was entering the revolving door from the interior of the store to exit the building. From video surveillance provided, an elderly patron decided to try and enter the revolving door from the exterior side of the store just as the door wing was approaching the fixed curved frame. The patron in the process of leaving the store was completely absorbed in a conversation with her friend sharing the same segmented compartment of this four wing system. Both ladies were not paying any attention to their proximity with the door wing immediately in front of them. They appeared to be less than 10cm from the face of the door as they were exiting the store. When the elderly gentleman entered the zone protected by the crush protection sensor (safety edge), the sensor performed flawlessly and stopped the rotation of the doorway to prevent him from being trapped between the fixed curved frame and the approaching door wing. One of the two ladies continued walking forward into the winged panel in front of her, breaking her nose.

In order to avoid any accidents, Turnstar recommends the following to all customers of the ATLAS automatic revolving door range.

1. Daily safety inspections should be carried out by building management of the building where the revolving door is installed. We also recommend that Turnstar be called in once a year for a general product inspection and in order to check that all the safety features are in good working order.

In summary, a single user of a properly functioning automatic revolving door is not subjected to any restrictions until a second or third user may create some sort of revolving obstruction conflict. When this happens everything from a slowing down of the revolution of the doorway to a complete stalling can and does occur. The first user of the doorway is now subjected to the behavior and potential improper usage of the revolving doorway by each consecutive successive user of these shared doorways.